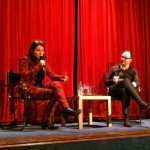 Something is Gotten in the State Broadcaster of Denmark

Fade from wise quote in Danish to our setting for this week’s pre-title sequence. It pans to the driech 11am Sunday setting of the Filmhouse Cinema in Edinburgh. The subject: Borgen. The subtitles elaborate our scene:

– But how can we be attending the earliest AND second showing simultaneously?

– Again… we were unable to get tickets for the single original showing at 5pm, so they put on a second showing at 11am. Simple.

– So now the original is the second showing?

– Well, no. Now that’s the third showing, after the 2pm. Watching Danish telly at the pictures was more popular than they thought it might be.

[FADE TO TITLE SEQUENCE AND THEME].

Following the screening of the dual ultimate episodes of the second series of the hit Danish TV series, its star, Sidse Babett Knudsen, agrees that the full Filmhouse cinema is “stunning”. It is, after all, the first of three full-houses of the day in the capital of a country of 5.25 million people, watching TV – in another language – at the cinema – about politics – in another country of 5.5 million people. We discuss how this unlikely state of affairs has evolved, by way of Borgen’s ‘usual suspect’ gender issues (and how much we admire Knudsen’s tartan trouser suit).

I ask her about the role of cultural capital in Borgen’s success, and she responds eloquently whilst also suspecting that she may not have fully answered the question.

Sorry, Sidse! I realise now that I was seeking an answer to an almost unanswerable question – it was the equivalent of asking within a twenty minute Q&A session:

“What role do you feel that DR1 (Danish Broadcasting Corporation), the BBC (and in particular BBC Four), Arrow Films, The Edinburgh Filmhouse (and their membership scheme), all the people in this cinema, all the actors and production staff of the series, its writer Andrew Price (and all their past and current associations and education) have in the success of Borgen?”

At heart my question was, in relation to the success of Borgen “Isn’t its success much more complex than any neat package of identifiable factors?” and more personally and hopefully to me as a PhD design student at Edinburgh College of Art “… and therefore in a country of a similar size to Denmark, aren’t we capable of generating and sustaining the kind of cultural capital that led to its success?” A fellow audience member elaborated cynically: “You get Borgen. We get River City.” Whilst I actually wasn’t questioning our programme output, I was suggesting that what appears on our screens comes down to what producers believe we will watch and what viewers believe it is worth watching. And that is not accidental – it is nurtured.

Why do we see multi-national banks sponsoring theatre productions? They recognise the importance of cultural capital, and they hope that some of its “collective magic” will rub-off on their economic capital generation.

Why do I watch Borgen? Because it’s great writing, acting and production, and I guess I hope some of it will rub off on me.

The Filmhouse Edinburgh continues its exposition of Danish drama with “The Killing and Borgen. What makes TV series travel?” on Monday 18th Feb 2013.

Tagged with → creativity • Edinburgh
Doing it for yourself! Family Album: Poem by Emma Cooke

Doing it for yourself! Family Album: Poem by Emma Cooke