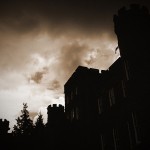 I’ve been in the security business more years than I care to remember, but few jobs stretched us as far as the Snow White gig did. Those were crazy days.

It’s not widely known, but the whole dwarf protection thing around her was a set-up; not a single one of us knew the others at the start. We had to audition to be on the Snow White Team. The cover was that we would be mineworkers, sharing a cottage together. Truth was, we were a ragbag of misfits. Street performers, security guys, cage fighters and con men, we all had skills that might keep Snow alive in the face of evil-queen shenanigans. And this Queen was a doozie.

I got the call from an old buddy I used to get wasted with. Most people think I got my name from back then, that it was the drink that made me irritable. As it happens, I was such a grumpy bastard when I stopped that I was always getting told to go back on the sauce. I mellowed a bit with age, but the name stuck.

It’s a fact that none of the names really fit the personalities. Stereotypes all of them. Nobody could be happy always; Sneezy only had summer allergies. Dopey looked dense as hell, I’ll give you that, but he was no dumb cluck. When Sleepy went easy on the pills he was as bright as a shiny farthing. I mean, I could go on, but you get the picture, we were just ordinary guys with some useful skills.

The deal was that Snow wasn’t to know we were paid protection. Local lore said she was of a delicate nature and quite sensitive. She needed to see the world in a safe way, through rose tinted eye-glasses. Doc gave it some kind of medical name. I thought it was sorta nice myself.

We weren’t sure exactly when Snow would get sent out from the palace, so we had a few weeks of practice in the quick-build cottage. We stayed in role, something that was tough. I’m not saying we were crude, but we did have to clean up our acts a bit. We ran a swear box for a couple of weeks; Bashful lost a mint. Some of the guys had habits that a young dame shouldn’t have to see.

There was a bit of heat at the start. Too much small man syndrome, way too much testosterone, not enough space. It was a recipe for gunpowder pie, and we had seven cooks. Despite the risk, we never blew; the mission came first.

The day she came it had started to snow; the snowflakes falling like feathers on the forest floor…

For those who want to read the unexpected end to this story, go to Far Off Places and download Issue 1 for a very modest fee.