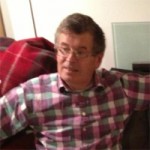 Dick Barton,
Special Agent!
Those drums should not have been allowed,
beating on the minds of the young,
and stirring feelings in the ill-prepared.

For example:
that airstrip in the jungle, cleared by men who might,
or might not,
have been working for our side,
but left certain mysterious clues there.

The chase
as the plane chunters down the runway
piloted by Jock,
who always kept a verry cool head,
while Snowy, reaching out one hand,
cries,

and Dick,
racing towards it,
just turns back to add,

and the plane rises into the air.

(In the original radio serial, the phrase ‘take that’ was followed by a sound like two coconut shells being knocked together)

Tony Lawrence is a scientist and poet.