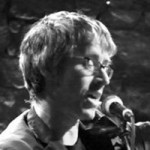 The man was pissed when he came to meet the housing officer. They went up the stair to look at the flat.

He got out his keys and opened up the big metal protective door. Then he used another key to open the front door. The hallway walls were covered in graffiti and the paint was flaking.

They went into the main room. The man went up to the smashed windows.

–           Fuck’s sake, said the man, shaking his head. He looked at the walls. Lumps of plaster were missing and there was debris on the bare floorboards.

–           Housing benefit address, said the housing officer. Looks like they ripped out the central heating when they got rumbled, took it with them.

He went back to the window and kicked some of the broken glass around the floor.

The man pursed his lips and looked around him.

Someone else to save How the Pure Heart Sounds