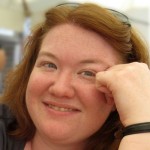 As she primped at the vanity mirror, Valerie heard a door crack open behind her and someone slip inside, soft shoes shushing against the plush carpet.  ‘We’re not supposed to see each other before the wedding,’ she admonished teasingly, flipping her veil forward to hide her face.

‘Oh Valerie,’ a chillingly familiar voice murmured, ‘after the amount of time I spent tracking you down, the least you can do is look at me.’

Gasping, Valerie flung herself out of her chair, staring at him in shock.  ‘Simon?  How did you find me?’

‘You’re not as smart as you think, Valerie,’ he said, striding towards her.  ‘For a man with my resources and intelligence, it was only a matter of time.’  As he spoke, Valerie had been inching along the wall of the small room, edging towards the door.  Suddenly Simon stepped in front of her, one hand slamming into the wall above her head.  ‘No one leaves me!’ he spat venomously.  ‘Did you really think,’ he continued, his voice quiet, soft, almost fond, ‘that you could sneak away from me, that you could outwit me?’

Beyond the door, the sound of the Bridal March started.  Simon smiled wickedly.  ‘You made such a beautiful bride the first time,’ he said.  ‘Pity you won’t get to do it again.’  Stepping back, he reached into his tux jacket.  Seeing a last chance, Valerie flung herself towards the door.  The silenced bullet hit home before she could reach for the handle.

‘Jack,’ Simon said quietly, thrusting his spade into the disturbed earth beneath the willow tree.

‘Hmm?’ Jack asked, absent-mindedly brushing dirt from his hands and tamping down the ground nearest him with one foot.

‘Jack, we must never speak of what happened here,’ Simon said sombrely, brushing off his own hands and staring at the brown scar amongst the green grass.  ‘And I need to get some topsoil and grass seeds,’ he added, as they started to walk away.  ‘Don’t let me forget.’

‘I won’t,’ Jack promised, clapping Simon lightly on the shoulder.  ‘I won’t.’

A Case of Mistaken Identity by Gerry Webber Dr Who?