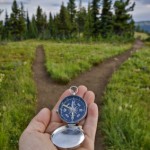 We are on a journey. What landscapes will we travail? Those scattered with the terminal moraine of death, decay and loss? Surely. But look up and metaphor and narrative will be our guides as we, just as certainly, climb the foothills of tenderness, love and humour. Yes, there are forbidden, desolate corners, but within the pages of the second edition of Far Off Places lie breathtaking vistas and powerful panoramas.

Lee Harrison’s stunning cover illustration ‘At Yesnaby’ invites us into the Back of Beyond where the first thing to note is the breathtakingly beautifully simple layout and design. But here are the poems. Here is the prose. These are our travelling companions.

Our expedition carries us through excavations in Poland to the desert, to Sutherland, Orkney, the Hebrides, or in explorers’ zeal, to capturing the whole world through artefact. We surf, search tenderly for unicorns (ending up with something different) and through the conduit of stones in shoes, we learn the basic rules of leopard engagement.

In celestial style Emma Cooke brings us via ‘How to Steal the Light from the Stars’ to the stellar canopy where sparkle entices, but should not always be trusted.

Chelsea Cargill’s haunting poem ‘Far Forest’ is about identity, about being pinned down by being known, about the quest to lose the restricting label again.

Simon French deals with the fallout from avarice in ‘Dust of 1000 Scratchcards’ but comes to realise that he already has what he needs. I love his line ‘I… stroke the cambers of your sleeping form’.

In Dakota Badlands, Norman Bissett lays out the Southern Dakota landscape like a corpse, but he finds grandeur hidden in its dead folds and, alongside this, human frailty is woven with uncertainty in the simply told, vivid horror tale ‘A man is Swinging’ by Anne Goodwin.

In ‘Kelp – Tiree’ Donald S Murray describes the ragged seaweed fringes of the sea, torn off and rotting on beaches, mirroring the perishing flesh of the war wounded.

Placing the mystery of lunar eclipse in a humdrum domestic setting makes Jean Atkin’s ‘Small Bathroom Eclipse’ particularly delicious. She leaps from the bathroom to the universe leaving us with questions about belief and meaning.

On tumbling pages kings bear gifts across deserts, a sweet-toothed alien visits, smiles shine out of shadows and the child who swam freely in the Canadian Pacific, thinks freer as an adult looking back.

In ‘Tennessee’, nobody wants to stop exploring and that’s the feeling you will have when you reach the end. You will want to explore the words, the form and the narratives again and again. This voyage is not one simply of pleasure. It is a voyage of transformation. These authors transport you to a far off place; a place which is familiar and strange in the same moment; a place that you will not be sure you will ever want to come back from. It’s time to look out your compass…