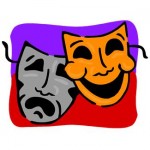 Friday Night, Festival Fringe
or
Nightmare on the Royal Mile

His friends said no. No
drinks tonight they didn’t want to fight
to the bar, through tourist hordes
quenching thirsts, critiquing acts, swapping facts
and fictions, whilst sipping wine, passing time, between
their concerts, plays and cabarets,
their music, comedies and shows, and who knows
what else they’ve come to see and hear,
consume, absorb, feel, touch.

In the lurch, he’s drinking fast so, although
in the pub for a very short time, he notices
the tell-tale stagger in his Friday night swagger
when sets out for home, alone, through evening air
and festive throng.
But suddenly
his eyes meet feet, not on the street,
but in the air, soles heavenward. He stares:
their owner’s head is in a pail.  Surprised, he
almost manages to fail to kick the bucket
then realises: he’s in a circled clearing, an audience
leering – at him – and this inverted vision, so
fearing the crowd’s derision, he hurries
to lose himself in their masses, passes
under three juggled torches, aflame, before
his ears meet a roar: a chainsaw revving
which soon he sees soar and arc like the flames,
its sharp-edged thrum drowning (almost)
the African drum beat which permeates
an a cappella group, a troupe of girls in shades
of pink, to him, a sweet, harmonic sight,
amidst cacophony, through which appears
a witch, very tall, who lets a leaflet fall:
‘Macbeth: who is that bloodied man? (on stilts)’.
As he tilts his head to read, the palest wench,
in blood drenched dress thrusts a paper
in his grip: ‘Dead Souls. 2 for 1!’

He battles round and through. Stops;
starts; pauses between acts; totters from pillar
to poster, to billboard, then stumbles, tumbles into a mouth;
a wide, white, cardboard grin welcomes him in, its legend
promising hilarity.  Unsmiling, pained, he stands
finds he’s offered a helping hand from a girl, all in red,
with horns on her head, who points her three-pronged wand
to the Tron: a church, austere, thick walled, grey stoned,
where, he imagines, a seat on his own, in quiet dinge, safe
from the Fringe’s riot, through which he does not hear
his devil-saviour cheer, ‘Go on in! Enjoy the Show!’
Intent on silent repose, eyes half closed, he fails to see:
‘Tonight! 21:00 hours! Burlesque! Free!’

Above him, the tower clock tolls: Nine.
Behind him, the creviced doors creak. Shut.
And all around bright lights erupt,…