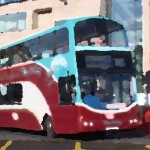 John Montgomery stood patiently at the door as his wife, Sadie, checked her bag for her purse, the pension book and the week’s message list.

“Yes, I’ve got everything.”

John locked the door of their top floor tenement flat where they’d stayed for over 40 years and the pair of them set off down the stairs.

“I’d better mind it’s our turn for the stair this week.”

“Only if you’re up to it. A week undone’ll make no odds.  The rest don’t bother.”

They made their way down the gritty, stoury stairs, past chained up bikes with rusted locks, the hippy rug hanging over the bannister and the old electric fire and plywood cabinet with its peeling veneer that had sat in the stair well for months.

John opened the stair’s front door for Sadie then pulled it over firmly, but gentle enough not to make it bang. Simultaneously, they took each other’s hand and headed for the bus stop at their usual steady, measured in-step pace.

Out of earshot, two young girls giggled at Sadie’s frayed underskirt hanging down below her skirt, her shabby anorak and John’s battered trainers.

“Heh, look at Romeo an Juliet! It wid take me aw mornin tae get ma hair like that.  Bedheids wi nae gel!”

John and Sadie were in the habit of not collecting their pension till the afternoon of pension day.

“It’s good getting the pension and messages out the road in one day.”

“Aye, an it’s good to dodge the blethers in the queue bummin about their grandweans.”

They would get their money, do their weekly shop, then have a treat of tea and a bun before heading home.

John pushed the trolley in to the supermarket café area and Sadie got the tray for their teas.  They sat down at a table near the window.  Sadie took off her anorak and started to pour the tea.  A shadow of sadness was behind her smile as a toddler ran round the tables.  She glanced at John but eating his slice of fruit cake took his full attention.

Margaret Allison patted her dyed and perfectly coiffed hair, that looked like a miniature tidal wave rising from her forehead.  She tied a chiffon scarf over the coiffure, put on her fake Burberry mac and checked her powder- patted face and bright rose lips. Perfect.   She put a packet of Bourbon biscuits in to her Jenners oilcloth shopping bag, put her handbag over her arm and looked about the flat.

“Just switch that thing off so they know I’m out. I suppose I’ll get used to all this in time.”

She closed the door, headed through the carpeted stair of the sheltered housing complex and went out for the bus.

“It’ll be good to see Kevin.  It’s been a while.  Must be Christmas.  Yes, he was down at Christmas for a wee while with my present.  I wish he’d waited till after the dinner, then I could’ve spoken to him properly. I got a bit flustered – him coming in like that and me with that paper hat on. Some friend making his dinner so he couldn’t be late.  Oh well.  What is they say? ‘A son’s a son till he marries a wife.’  I wish he had a wife.  Says he’s too busy to find a girl. Hmm. Doesn’t stop him going out.  Seems to be out every night.  Lucky I found out about his day off today.  He always liked Bourbon biscuits when he was a wee boy.  I hope he’s out of the habit of dunking them in his tea. Copying his father. Hm.  Oh good.  Here’s the bus.”

Some big smoke grey clouds drifted across the pale green early evening sky, when Margaret Allison got on the bus to return home.  She nodded slightly at the driver as she showed her concession pass before carefully putting it back in her bag.  She started to make her way up the bus looking for a seat.  A woman across the aisle spoke.

“Hullo, Mrs Allison.  Is that you been doon visitin yer laddie?”

“I just told my laddie.  Just you stay in. I don’t want you coming out in this cold to park your car again.  I’ll get the bus. I mean he’s got his work in the morning and he’s his own tea to get.  It’s not as if he’s married.”

“Aye.  Bein married makes a difference, I suppose.  Mind you, it’s no made a difference tae me.  I’ve been married over forty years an he still gets on ma nerves. All I got for my Ruby Weddin was a red face! I watch him doin his crossword an try no tae let him bother me.  He just leaves me tae dae everythin.  While he’s away at the pub.  ‘Just you get on’ he says. Aye.  Talk aboot a soul mate!  I’ve never had a soul mate.”

“I suppose it can happen.”

“Aye.  Maybe. No tae me. I’ve seen folk my age go aboot hand in hand. An I’ve wondered, did they aye dae that or is it just since they got older?  I’ve often wondered that.”

The bell rang and John and Sadie got up to get off the bus.

“Thanks, driver,” they said almost in unison.

John helped Sadie off the bus, each with their share of the messages.  They walked along the road in step, in time, in unison.
Margaret Allison’s fellow passenger looked out of the opposite window.

“Folk’ve asked me, ‘If ye were left yersel, would ye ever get married again?”

“What would I want to do that for?”

Tagged with → children • Edinburgh • journey • lgbt • love • relationship • Sadness • Scotland
Russian Girls, 1989 by Rose France Out of the darkness, into the light: seven stories in fifty words by Spiderboy

Russian Girls, 1989 by Rose France Out of the darkness, into the light: seven stories in fifty words by Spiderboy