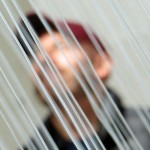 Charge Nurse Sceales looked over her half-moon spectacles and adjusted the infusion rate of the pump. It was her first day back after leave and she gave the impression that she was back a month too soon. Agnes watched from the bed. As the clear fluid dripped through the chamber she thought of tears. Mechanical tears dripping in time like a metronome. No ebb or flow. Controlled and precise. Drip, drip, drip, drip.

Nurse Sceales frowned and looked at her watch. She pulled a white form out of a pocket and with a pencil clutched in her hand like a stiletto she turned to look at Agnes’s forehead. ‘Now,’ she said in a business-like bark, ‘What would you like for your lunch today?’

Agnes looked at her carefully. Eunice Sceales was tall and thin with a flat face. Her mouth was like a tear in a shroud. She had pale blue eyes, which oriented themselves at an angle – perhaps because she seemed to perpetually incline her head about fifteen degrees to the side. It gave her the impression of constantly evaluating her patients for flaws.

‘What are the options, my dear?’

‘You can have macaroni cheese bake, smoked haddock in a cream sauce or sausage and mash.’ She said it with the slightest hint of animosity, as if food for patients was a bridge too far, an overly generous indulgence.

‘Now, I’m fond of smoked haddock, but it does have a tendency to repeat. On the other hand pasta tends to bind me a bit.’ Agnes paused. Nurse Sceales’ pencil twitched. ‘What do you think?’ she asked the nurse.

Agnes played with the edge of her pink shawl. ‘I’m really not sure. Do you think the macaroni will be topped with cheese? That’s the way I like it. Betty Smollet used to make the most delicious macaroni cheese. She would mix chedder with parmesan and it would crisp up lovely on top. I wonder if it will be like Betty’s.’

Nurse Sceales scratched the pencil across the tick box for the macaroni. The lead broke and flew onto the white sheets of the bed where it sat like a small black eye, inspecting the scene.

‘Macaroni cheese it is then,’ she said and turned her back.

‘And what about a pudding?’ asked Agnes. But if Charge Nurse Sceales heard her, she did not let on.

An hour or so later, Agnes pushed the buzzer and Johnny, the nursing assistant with the tattoo on his forearm, came to answer. ‘I hate to be a bother, but do you think I might have some help to get to the bathroom?’ She had long since swallowed her pride about being assisted onto the toilet by a man. Johnny grinned. ‘No bother gorgeous. No bother at all.’ He disconnected her from the drip and fetched the wheelchair.

While it was true that her bladder was at a particular level of capacity that demanded reasonably urgent attention, she had an other agenda on this short trip. As she was being wheeled down the ward, Agnes brought up the subject of pudding. ‘You wouldn’t happen to know what desserts were on the menu for today’s lunch?’ she asked.

From behind she heard Johnny say, ‘Wait a minute and I’ll see.’ He stopped at the nursing station and picked up the menu sheets, which were still to be collected. ‘Vanilla ice cream and strawberry jelly or Eve’s pudding and custard. Which will it be?’

‘Oh, no difficulty there,’ said Agnes. ‘If it were down to me, I’d skip the macaroni cheese and have two portions of Eve’s pudding and custard.’

‘No can do darling, but I’ll put you down for one portion. Is that good enough?’ Agnes twisted round and put her wrinkled hand on top of Johnny’s. ‘You are a lovely young man and your mother must be proud of you.’ Johnny laughed.

At twelve fifteen Johnny and one of the other nurses distributed the meals. Agnes looked disappointedly at her macaroni. It was anaemic and looked like it had been boiled rather than baked. She forked at it listlessly and managed to eat a little. Finally she could wait no longer. She took the plastic lid off the pudding. The aroma of apples and custard rose up to delight her.

She picked up her spoon and for a second it hovered above the steaming custard. At that moment Nurse Sceales’s slender hand appeared from the periphery of her vision and scooped the bowl away.

‘What are you doing?’ asked Agnes indignantly.

‘You’re diabetic. Diabetics must avoid sugar. You know that, Miss McMicking. I was really clear on this. Whoever is responsible will answer to me!’ Eunice Sceales eyes were curiously devoid of emotion, but the corners of her lips curved down like a thin scimitar and her brow was sharply furrowed.

‘I’ve had pudding every day since I was admitted,’ said Agnes.

‘Who has been ordering sweets for you?’

‘I don’t remember,’ said Agnes. The spoon was still in her hand. It was shaking.

‘It’s negligence – that’s what it is.’ Eunice Sceales’s voice had risen in timbre. It was thin and penetrating. ‘I will not have this kind of dangerous behaviour on my ward.’ She leaned forward and swiped the spoon from Agnes’s rheumatic fingers. ‘If you must have something, you can have an apple.’ She took off down the ward with the pudding held out to the side as if it were a bedpan with an offensive load within.

Agnes pushed back the table and smoothed her sheets over her lap. She steadied the tremor in her hands and gritted her teeth to prevent tears. She felt about six years old. That was not a satisfactory situation for a lady of her years.

When she grew calmer she leaned across to her locker and fumbled for her mobile phone. She found her glasses and dialled her nephew’s office number at the Scottish Government. Sir Nigel Lundie-Dick was a senior civil servant and he was very fond of his aunt. Brenda, his secretary, answered and put her through.

‘Are you all right Aunt Agnes?’

‘I’m fine Nigel, but I have a tiny little problem and I don’t know what to do. It really is nothing, but it’s upset me and I hope you don’t mind me bothering you with it.’

‘Well we can’t have that. Go ahead and I’ll see what I can do to help.’

‘Is this completely necessary?’ the Professor asked him. ‘I have a one o’clock today, a private patient I would prefer not to keep waiting.

‘I’m afraid so,’ said the Administrator. ‘I will meet you in Ward one in five minutes.’

When they arrived Professor St. Leger Sword looked around the ward until he saw what he wanted. With a flick of his wrist he beckoned Charge Nurse Sceales who dropped the chart she was writing up and joined the two men immediately. The three of them strode down the length of the ward as if on the way to a cardiac arrest. Nurses, nursing assistants and patients scuttled out of their way as their feet hit the linoleum in unison. They reached Agnes McMicking’s bed and stopped. The professor unbuttoned the jacket of his pinstripe suit and pulled his glasses down his nose by an inch.

‘Miss McMicking, we’ve had a phone call from the Minister for Public Health – hardly an everyday occurrence in my experience. Now, what’s seems to be the problem?’ His voice was not unkind.

‘Oh, dear, I do hope I haven’t caused a fuss. I was just talking to my nephew, he works for the Government you know, and he was asking me how I was doing and I just mentioned how I was going to miss my puddings now they’ve been cancelled.’

‘Cancelled? What do you mean cancelled? Who on earth has the authority to cancel puddings?’

Agnes looked at Eunice Sceales. She was pale and her hands were clenched. Her eyes met Agnes’s. They were the colour that forget-me-nots might be if they had been frozen in ice and not yet thawed.

‘I can’t quite remember, but it’s to do with the diabetes, that’s what’s been said.’

‘The diabetes? Remind me Miss McMicking; how old are you again?’ asked Professor St Leger Sword.

‘Eve’s pudding it is then,’ he said with a clap of his hands. Without further ado he spun on his heels, brushing past Charge Nurse Sceales on his way to his one o’clock.

After no more than two or three strides he paused and shouted over this shoulder. ‘Better make it a double portion.’ He flapped his arms as he took off again. ‘Compensation for any distress caused.’

Agnes patted her hair and raised an eyebrow at Charge Nurse Sceales who at that moment was examining a spot on the floor.

‘My dear, whenever you are ready…’