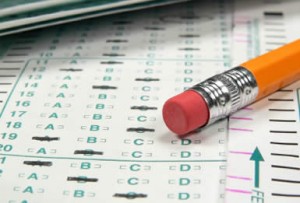 Psychobabble
– Next question. Would you describe yourself as decisive or indecisive?
– It depends on the circumstances.
– Ok, indecisive.
– No. I wouldn’t say that exactly. It’s just that I’m not impulsive.
– Right. Question 30. If you enter a room full of strangers do you feel excited or anxious.
– What sort of room?
– It doesn’t matter.
– Well, what sort of event do you have in mind?
– I don’t have anything in mind.
– It’s difficult to know in that case. I mean, if it was an interview, I’m sure I’d be anxious. On the other hand, I suppose it might be a surprise party, which would be quite exciting, wouldn’t it?
– I don’t think strangers would be throwing a party for you, would they?
– I thought you didn’t have anything in mind?
– No… well. Let’s say anxious, shall we?
– Alright.
– Fine. Next. Is an eighty percent chance of success better or worse than a twenty percent failure rate?
– Crikey, that’s difficult! Are they the same? I don’t know. Are those the only possible outcomes? What about partial successes?
– Look, it’s a psychometric test, not a maths exam or a philosophical debate. I don’t think it matters. It’s about your attitude to risk.
– Of course it matters.
– Not for this purpose it doesn’t.
– Risk, you say? Ok. I think I’d better say eighty percent. The positive one.
– So. Let’s move on. Beer or wine?
– That’s not a proper question.
– I think you’ll find it is.
– It’s not grammatical.
– Well, there’s a question mark at the end of it.
– I don’t think that makes it a proper question. It’s just a choice between two nouns. It’s not even a sentence.
– Look, Mr Robertson, you just need to choose one. Do you generally prefer a glass of beer or a glass of wine?
– Red or white?
– Whichever.
– This is nonsense. What’s it supposed to prove?
– Nothing in itself. The questions are cross-correlated during analysis.
– Alright. Let’s say wine. White wine. That’s gender-neutral, isn’t it. But hang on. How many units of alcohol are there in a glass of wine? I can’t remember. This isn’t a trick question is it?
– There are no trick questions, Mr Robertson, it’s just a personality test.
– Ok. Wine.
– Thank you. Question 33. Would you prefer to play chess or football?
– Ah! I get this one. It’s about sociability. Isn’t it? Teamwork.
– I can’t help you, I’m afraid. I just ask the questions.
– Like the Gestapo.
– I’m sorry?
– In the war.
– I don’t think that’s very appropriate Mr Robertson. This is part of a formal selection process.
– Yes. Sorry. Forget that. I say stupid things when I’m nervous.
– Ok. So. Chess or football?
– Oh. Hang on. Maybe this is about whether I’m a thinker or a doer. Is it? In which case, I think… er, I think… I’ll say football.
– Right. Football it is.
– I’m not much good at it though.
– That doesn’t matter.
– Alright. What’s the next question?
– Would your friends describe you as dynamic or caring?
– Blimey, Big Mal would have a fit if I even asked him something like that!
– Big Mal?
– My best friend. We don’t talk much about stuff like that. We mostly talk about music and things in the news. Big Mal talks quite a bit about football too. He’s an Arsenal fan. But I don’t really follow football – although I do follow it more than chess.
– Look, this isn’t about your friends.
– Isn’t it? I thought you said it was.
– No. It’s about what you think your friends would say.
– Well, I couldn’t really tell you without asking them, could I?
– For goodness sake, Mr Robertson. I don’t think you are taking this seriously.
– No. I am. I’m just a bit… stressed. Let’s say “dynamic”. I’m certainly more dynamic than Big Mal. He still lives with his mother, which is ridiculous at his age.
– Ok. Last question. Is it preferable mostly just to let things happen, or to make sure things are arranged?
– What things?
– Any things.
– So, like… was the Black Death better the Spanish Inquisition, for example?
– Let’s leave that one. I think we’ve completed enough of the questions to analyse the results. I just need to do this… submit the file… and here we are.
– So, what does it say?
– Well, on the upside, the report suggests that you have an enquiring mind and you like to consider the evidence carefully before reaching a conclusion. You are an independent thinker, and are able to draw upon a range of sources. You value intelligence and have high standards in this regard. You listen carefully to what people say, and you are quick to form and express judgements.
– That sounds good.
– Yes. It does, doesn’t it? On the other hand, Mr Robertson…