So long, farewell by Gerry Webber 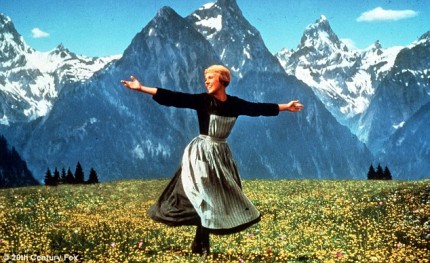 Throughout the spring and early summer, Friedrich rose early each morning and climbed the crag behind his farmhouse to tend the herd. Today was no exception, apart from one thing. This was the first time he had ever seen a nun running towards him over the brow of the hill. Her arms were outstretched. Her face was raised to the sky, her countenance euphoric. She appeared to be singing to herself. He assumed that she was on drugs. In any event, she wasn’t looking where she was going, so as she breached the ridge and the ground beneath her feet dropped away, she landed heavily, losing her balance and stumbling over a succession of grassy tussocks. Her arms flailed wildly as she sought to regain her footing, and then she collapsed, quite suddenly, it appeared, like an abandoned marionette, rolling awkwardly down the slope before coming to rest at his feet.

Unaccustomed to company in the mornings, particularly that of women, and especially of nuns, he stood for some moments in brutish silence, staring curiously at the bedraggled figure that lay like a broken doll amidst a patch of mountain daisies, the name of which he could never remember, just inches from the muddy caps of his old work-boots. He didn’t move, and nor did she. He thought she might be dead, and considered whether, if she was, he should leave her for the carrion crows. Reporting the death of a holy woman on a mountain top was bound to arouse suspicion, and would no doubt involve him being questioned by the police. He couldn’t afford to neglect the animals at this time of the year. He prodded the nun with his boot. There was no response. So he rolled the body to the foot of the nearest drystone wall, and corralled the goats before leading them back to the farm. He needed time to think.

Later that day, the local police chief arrived at the farmstead. Friedrich was milking the nanny goats in the barn behind the house. The out-building was old and spacious, with one area for milking, another for shearing, a third for feeding the goats, and a fourth which functioned as a small slaughterhouse consisting of a bleak holding pen above a drain, a rack of meat hooks and a battered incinerator. The acoustics were almost as bad as the smell, and Friedrich failed to hear the Captain when he entered the shed.

“Ah. There you are Freddie. I thought I might find you in here”. He paused and looked around, presumably hoping to spot a poorly-concealed wimple amidst the straw. “You’ve heard the news, I suppose?”

Friedrich looked at him vacantly.

“What news?”. He wasn’t going to be caught out that easily.

“It seems we have another woman gone missing”.

“Quite a coincidence, don’t you think, Freddie? First your wife, and now this young girl”.

“So is she a girl, or a woman?” Friedrich asked, as casually as he could, sensing danger.

“Good question, Fred. It might be important when you get to court, eh? Well, unlike the wife you, er, ‘lost’…”

“She ran away” Friedrich interjected, bitterly. He missed her.

“Yes, well… unlike your missing wife, this one is just a teenager, Fred. Sixteen? Seventeen? We’re not quite certain at the moment, but young for sure. A lot younger than you Freddie. Too young for the jury to give anyone the benefit of the doubt. Far too young. Maria. That’s her name, apparently. Foreign too, so the boys from the embassy will be looking for results this time. If seems she was over here with a few other girls on some kind of a hen party. One minute they’re having a knees-up in the old ski lodge. Next thing, Maria doesn’t make it down for breakfast.”

“Well, she’s not here, if that’s what you’re thinking, Captain”.

“I don’t doubt it Fred. Experienced killers don’t leave corpses laying around the house, do they? No. I just thought I’d drop by to let you know that we’re on the case. You know how it is Freddie. Community policing. Keeping local residents informed of progress. That sort of thing. Still, you won’t mind if I have a look around while I’m here, will you, since you’ve got nothing to hide?”

Friedrich ignored the Captain and returned to his milking. The Policeman strolled around the shed with the sole aim of unnerving the farmer. Then, silently and without ceremony, the Captain took his leave. Friedrich watched him go, knowing that he would be back.

That night Friedrich slept badly, wondering what he was going to do about Maria. He considered telling the truth, but knew that would end badly for him. The Captain was still convinced that he’d killed his wife. Besides, he had probably missed his opportunity to be honest now, not least because he hadn’t reported the accident immediately, assuming correctly that he would be regarded as a killer rather than a concerned citizen. It was too late, and anyway, he had moved the body, so it was no longer possible to pretend that he had merely stumbled across the corpse when the girl had been laying in the corner of his own field for twenty four hours. A sixteen year-old foreign girl. The Captain would destroy him. He couldn’t rely on the crows either. He wasn’t thinking straight yesterday. It would be months before the birds would pick the body clean, and even then, he’d have to bury the clothes and dispose of the bones. He needed a better plan.

Two days later, the Captain returned. He had five men with him.

“Well, Freddie. Here we are again. Only this time, I’ve got a warrant, so we are going to search high and low, and we’ll climb every mountain around here if we have to until we find that poor girl. Unless you’d like to tell us anything before we start?”

Four hours later, the Captain and his men left the farm house with three bags of evidence containing what Friedrich assumed to be unimportant items of sentimental value, the last few reminders he had of his wife, a few of his favourite things.

They were about to begin work on the old barn when the Captain checked his watch and called the crew to order.

“We’ll search that building later. I reckon we should check the high fields next, before the light fades. You’ll be coming with us, as it goes, Fred. I don’t want you out of my sight.”

They set off across the pasture behind the farmhouse, through a large wooden gate, and along a rough path that wound its way towards the top of the mountain. As they neared the fields towards the summit, the Captain stopped to contemplate the landscape. Like all detectives, his mind was alive with the possibility of phantom realities, inventing and reimagining events like a novelist, assessing their plausibility like a scientist. He was the keeper of the keys to parallel universes: one where a guilty man is punished; another where a killer escapes justice; a third where an innocent man is destroyed. He surveyed the grassland and the patch of white flowers beneath the crag. He listened to the random music of the bells that were draped around the necks of the goats. The hills were alive with the sound of it. He let his eyes wander along the length of the drystone walls and the tufts of grass beyond the furthest ribbon of stonework.

“There”. He pointed unerringly to the spot where Friedrich had left the body. “I want you to check behind that wall, just there, below the edelweiss.” His men ran ahead. The Captain followed slowly with Friedrich.

“You don’t look too good, Freddie.” The captain was enjoying himself.

The Captain raised an eyebrow.

“Not for a farmer” he said, and turned his back on Friedrich to continue the ascent.

It was late afternoon by the time the team had finished their work. In truth, they had found nothing, just a muddy patch of grass replete with boot marks and deep indentations from the legs of a goat which had sunk into the earth as if the ground had been soft, or the goat had been carrying a heavy load. There was no sign of the girl or the fancy-dress costume that her friends had said Maria was wearing when she disappeared.

The Captain was more annoyed than crestfallen, irritated by the thought that the goatherd might have outsmarted him.

The sun was low in the sky now. There was just a drop of golden sun, but the Captain was determined to bring his suspect to justice and led the party back to the old barn, where the search for evidence continued, even as the light began to fade.

The officers drew their torches and fanned out to examine the inside of the shed. One investigated the area that served as a milking shed. Another searched the shearing pen. Two men scoured the troughs which the well-fed goats had licked entirely clean. Their catholic appetite was legendary. The Captain focused on the slaughterhouse, inspecting the drain and the heavy cleavers with infinite care. Nothing. Finally, he shone his torch through the window of the incinerator, the inside of which was, as he suspected it would be, clean. He cursed under his breath and was about to call a halt to the search when he realised that the incinerator door was still radiating a gentle warmth. The captain opened it and looked inside. Then he had an idea. Closing the door he felt beneath it and pulled open the metal tray that collected the residue. There was nothing in it but ash.

The beam of light from his torch danced across the surface of the grey powder which the Captain turned slowly with his gloved fingers. He was certain that the lonely goatherd was guilty. Something had happened in the fields above the farmstead. The Captain’s theory was that Friedrich had loaded the girl, dead or alive, onto the back of a goat and brought her down to the barn where he had butchered her, fed the pieces to his goats, and incinerated the remains. But he doubted now that he would ever be able to prove it.

He gazed distractedly at the fine ash running between his fingers.

He thought at first that it was a trick of the light, and then he realised what it was. He picked the small cut diamond from the tray and held it before him in the harsh light of the torch. He smiled.

“Oh dear, oh dear, Freddie. It looks as if you forgot about Maria’s jewellery!”

Friedrich felt his stomach turn. He recognised the stone at once.

It was from the engagement ring that he had given his wife.