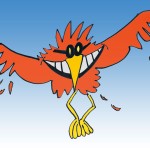 Here’s a poem I learned at school. It’s been attributed to Nash, EE Cummings or even Spike Milligan, but the consensus is that nobody knows who wrote it. I like it because it is whimsical and witty. I think my writing benefits when I don’t take myself too seriously. Read it in a Bronx accent for maximum impact.

Spring is sprung, the grass is ris.
I wonders where the birdies is.
They say the birds is on the wing.
Ain’t that absurd?
I always thought the wing was on the bird.