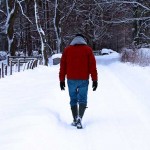 The snow has arrived in Edinburgh. It’s gracing the New Town with gentle ice-down and it is rather lovely. As I was thinking of putting pen to paper to capture it, I wondered how other writers have tackled the subject of snowy weather. How have they described it?

‘something wild out there, white bees of the Mabinogi at the window, night swirling with a swarm of early snow.’

I like the anomaly of bees swarming in winter and the wildness of it all.

In The Snow Storm, Ralph Waldo Emerson talks about the ‘whitened air’ creating a veil  over ‘farmhouse at the garden’s end.’ He creates the image of the north wind as a mason, sculpting the snow:

‘Mockingly,
On coop or kennel he hangs the Parian wreaths;
A swan-like form invests the hidden thorn;
Fills up the farmer’s lane from wall to wall’

Less romantically, Burns, in Winter: A Dirge, has winter weather as a scourge (the clue is in the title) with winter very much in control:

The wintry west extends his blast,
And hail and rain does blaw;
Or the stormy north sends driving forth
The binding sleet and snaw
While, tumbling brown, the burn comes down,
And roars frae bank to brae;
And bird and beast in covert rest,
And pass the heartless day.’

In How the Snow Falls, a quirky little piece, Craig Raine paradoxically describes the sensation of falling snowflakes as ‘like the unshaven prickle of a sharpened razor.’

‘Snow:
Years of anger following
Hours that float idly down -‘

‘The cold wind burns my face, and blows
Its frosty pepper up my nose.’

No doubt there are dozens more poems where snow is entertained in verse. If you have a favourite, let me know. I’ll finish with an excerpt from Robert Bridges’ London Snow which, although written 120 years ago, bridges the gap in time remarkably smoothly:

Then boys I heard, as they went to school, calling,
They gathered up the crystal manna to freeze
Their tongues with tasting, their hands with snowballing;
Or rioted in a drift, plunging up to the knees;
Or peering up from under the white-mossed wonder,
‘O look at the trees!’ they cried, ‘O look at the trees!’

Festival The Power of Words: Guest Blog By Sian Fiddimore